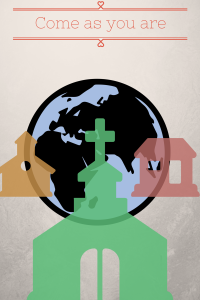 Reading through the scriptures today and preparing for the Christmas Eve service has me spinning on an idea that is a familiar stream woven throughout scripture, the idea of coming as you are.  The gravity of the Jesus’ ministry, the incarnation of God coming to people is nothing short of breath taking.  It’s one of those themes that we can quickly gloss over, as we run to the more exhilarating passages of scripture.  It’s one of those themes that should shape our ministries and our communities as we live life.

The commands of Scripture, as we should read it, are almost always plural.  Set to be done by God’s people.  Jesus’ ministry in a sense should always be considered in a communal state.  Jesus, the lamb of God, came down to the earth so that he would reconcile His people to Himself.  The miracles that he performed brought great glory to His Father, opening the eyes and the ears of some of the people around Him.  The interesting part of this is that the people did not do anything to warrant forgiveness nor did they do anything to clean themselves up.  Jesus called them “as they were.”  If we take this theme and apply it to our communities, I think that what we will find is that we require people to act a certain way for us to welcome them in.  We might mask our expectations with calls to the alter or charitable giving, but ultimately within the Church we expect that people will act a certain way.  This way is vastly different among churches, some churches require that you keep your hands down while worshiping and yet others look down on outward worship.  Regardless of the expectation, we as a church frown on and ultimately miss opportunities to engage one another because of our presupposed expectations.   The most evil and dangerous part of these expectations is that they evolve within a community.  As communities grow and become bonded, they develop their own expectations.  When the expectations of the community are not met within the community, there is hostility and often shunning, until the expectations are met.   This is not a hard and fast rule, just a simple observation.

I was having a conversation with a friend of mine recently and I made a statement similar to the one that I just wrote, and it made him angry.  Angry at me and he was rightfully so.  I joined in on the communal expectation, ultimately ostracizing my own because they failed to meet the standard that I had set for them.  Of course, realizing my error, I apologized and repented for failing to see the error in my ways.  The conversation didn’t end there.  We talked and I pondered about what the implementations of my blindness has for the communities that I’m involved in.  How had my worship slipped back into self righteousness?   The question is answered in the beginning of this writing, it’s an indicative/imperative assessment.

I failed, and we fail because we do not allow people to come to us as they are.  We suppose that they will act a certain way, react a certain way or at least pretend to act a certain way.  This creates communities that are not built on trust, but rather behavior.  It’s simply going back to behavior modification on a communal level.  It’s an issue that stems from original sin, we want to be God, and in doing so we throw burdens on people that aren’t theirs to carry.  We want the clean, and yet we are called into the dirty.

My prayer is that our hearts will be broken for the broken.  As broken people we will realize our faults and repent of our sinful ways.  That we will yearn to be in the front lines of ministry, open about our brokenness and always on guard for the sin that is crouching at the door.  That we will be people that look more like Jesus and less like the religious leaders.  That God will move people into our paths, to challenge the norm and to force us to see the log that is in our own eye.  Let us not be a people that misses the point, that gathers around expectation and in doing so, fails to point people to the one that never failed.  His name is Jesus.

As we read the scripture we find that God has unchangeable characteristics and works in ways that we can’t fathom. The fear of The Lord, like in the passage that’s highlighted focuses us on the fact the God is sovereign and that we should not only focus on his unwavering love, but on his ultimate and unbridled power. I think we can start in

In the beginning, God created the heavens and the earth. (Genesis 1:1 ESV)

And recognize that nothing started before God, hence he is the creator of all. That power alone is nothing short of awesome. We couldn’t exist without the Creator and with that mindset and a reverent fear we start to take “us” or our selfish wants, desires, and egos out of the walk with Him.

and the earth opened its mouth and swallowed them up together with Korah, when that company died, when the fire devoured 250 men, and they became a warning. But the sonsof Korah did not die. (Numbers 26:10, 11 ESV)

Where we see God open up the earth, swallow the disobedient Israelites as a warning to the rest as they proceed through the wilderness. Two things with this passage, God is showing what happens when you step away from him and want to be a slave to something over than his rule, the Egyptians in this case. And two that He continues to show grace by not destroying the sons of Korah. We can also we that God offers multiple opportunities and is not quick to anger but will be the judge in His time.

The argument then goes to…. That was the Old Testament God, but as we see in

But a man named Ananias, with his wife Sapphira, sold a piece of property, and with his wife’s knowledge he kept back for himself some of the proceeds and brought only a part ofit and laid it at the apostles’ feet. But Peter said, “Ananias, why has Satan filled your heart to lie to the Holy Spirit and to keep back for yourself part of the proceeds of the land? While it remained unsold, did it not remain your own? And after it was sold, was it not at your disposal? Why is it that you have contrived this deed in your heart? You have not lied to men but to God.” When Ananias heard these words, he fell down and breathed his last. And great fear came upon all who heard of it. The young men rose and wrapped him up and carried him out and buried him. After an interval of about three hours his wife came in, not knowing what had happened. And Peter said to her, “Tell me whether you sold theland for so much.” And she said, “Yes, for so much.” But Peter said to her, “How is it that you have agreed together to test the Spirit of the Lord? Behold, the feet of those who have buried your husband are at the door, and they will carry you out.” Immediately she fell down at his feet and breathed her last. When the young men came in they found her dead, and they carried her out and buried her beside her husband. And great fear came upon the whole church and upon all who heard of these things. (Acts 5:1-11 ESV)
God strikes down two people in the beginnings of the first church in acts.  There is lots here but for this discussion I think that it shows that God didn’t change throughout thescripture.

I think that if we truly visualize the description of God in several key texts we can also see that we would be so blown away by Holiness and Majesty that our natural reaction would be to fear The Lord, just as Isaiah did in

In the year that King Uzziah died I saw the Lord sitting upon a throne, high and lifted up; and the train of his robe filled the temple. Above him stood the seraphim. Each had six wings: with two he covered his face, and with two he covered his feet, and with two he flew. And one called to another and said: “Holy, holy, holy is the Lord of hosts; the whole earth is full of his glory!” And the foundations of the thresholds shook at the voice of him who called, and the house was filled with smoke. And I said: “Woe is me! For I am lost; for I am a man of unclean lips, and I dwell in the midst of a people of unclean lips; for my eyes have seen the King, the Lord of hosts!” (Isaiah 6:1-5 ESV)
And John did in
Then I turned to see the voice that was speaking to me, and on turning I saw seven golden lampstands, and in the midst of the lampstands one like a son of man, clothed with a long robe and with a golden sash around his chest. The hairs of his head were white, like white wool, like snow. His eyes were like a flame of fire, his feet were like burnished bronze, refined in a furnace, and his voice was like the roar of many waters. In his right hand he held seven stars, from his mouth came a sharp two-edged sword, and his face was like the sun shining in full strength. When I saw him, I fell at his feet as though dead. But he laid his right hand on me, saying, “Fear not, I am the first and the last, and the living one. I died, and behold I am alive forevermore, and I have the keys of Death and Hades. (Revelation 1:12-18 ESV)
Both men of God trembled at his feet. I think that if we had that experience we would have a better understanding of why fear is the beginning of all knowledge. If we chose not to have a reverent fear of The Lord I feel like we start placing ourselves above Him, not truly embracing his complete and perfect power, his Love and his Holiness.
“I am the Alpha and the Omega,” says the Lord God, “who is and who was and who is to come, the Almighty.” (Revelation 1:8 ESV)